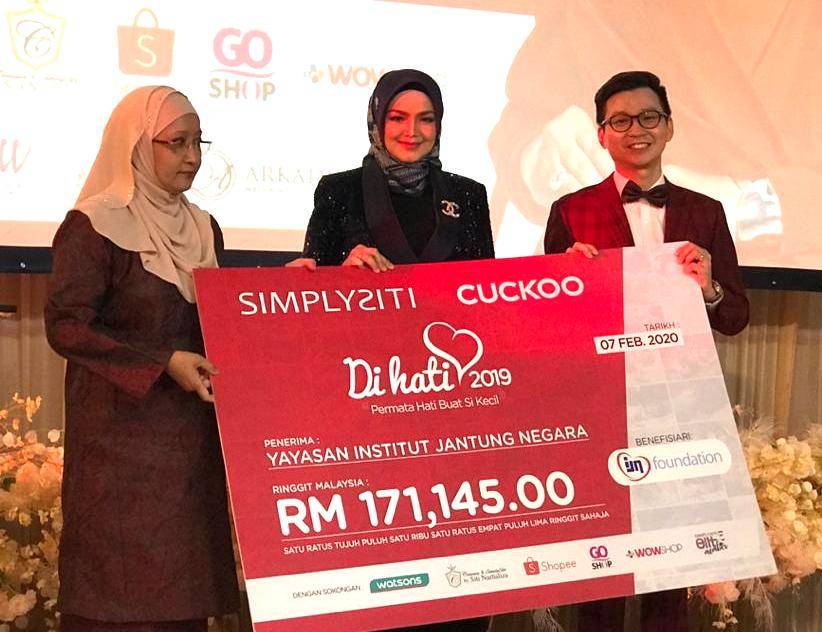 Kuala Lumpur, 7 February 2020 –It was announced that CUCKOO has been named as the biggest donor for the Corporate Social Responsibility (CSR) Program held by SIMPLYSITI Di Hati 2019 for the cause of funding children who are seeking treatment at the National Heart
Institute (IJN) Malaysia.

The closing ceremony for the SIMPLYSITI Di Hati Campaign 2019 was held at Magica @ Quill City Mall, Kuala Lumpur on Friday night where recipients of the donation, business partners, sponsors, SIMPLYSITI’s users and members of the media attended.

Besides garnering attention from the public, this campaign has also been receiving support from big corporations such as CUCKOO International which has donated RM100,000 to the cause – making the accumulated amount received to be RM171,145 in 2019.

A mock cheque was presented from Founder and Chief Executive Officer of CUCKOO International, Mr KC Hoe alongside President of SIMPLYSITI and CUCKOO Ambassador, Dato’ Sri Siti Nurhaliza to Raja Datin Seri Zuraida Raja Mansur, chairman of the social and welfare committee and member board of trustees of the IJN Foundation.